In my early days in sales, I learned the traditional sales tactics from corporate America’s legendary business gurus.

I spent over a decade, creating and running, ground-breaking global enterprise sales programs for the likes of Qualcomm and UPS.

I did well, initially.

But the turning point in my life, my fork in the road, came one fateful afternoon, when I got on what I thought was going to be the sales call that would set me up for the rest of my career.

To be honest, it was… but just not in the way I expected.

Have you ever had a sales call that felt like a “love fest”?

Everything was going by the book.

They were interested, they were asking me tons of questions and I had all the answers at my fingertips.

At the end of the call, they thanked me profusely for my time and the vice president’s final words were, “We’ll definitely be getting back to you.”

I was so proud of how well things had gone that I could almost feel my head swell as I started to hang up the phone.

But then, instead of pushing the “off” button on the speaker phone, by pure accident, I hit the “mute” button.

I didn’t realize it until I heard them continuing to talk – they hadn’t hung up the phone… but thought that I had.

And what do you think they were saying about our promising phone conversation?

“Okay.” It was the vice-president’s voice. “So, we’re definitely not going to go with him. But keep stringing him along and get more information out of him so we can get a better deal with another company.”

My first feeling was outrage that they had lied to me. I felt hurt and used, but the feelings of rejection that swept over me were even worse.

“I’m a good guy,” I told myself. “I did everything right. I’ve studied all the best sales programs in the world. I didn’t cut any corners. Why are they treating me this way?”.

Well, it took me a long time to figure out that the problem wasn’t with them, it was with me.

That realization, coming into that awareness… that was the moment that defined the rest of my career.

Now, contrary to what you might be thinking, I did not get my breakthrough from reading more sales books, attending more seminars or joining more mastermind groups.

Those still had their place but they weren’t how I reached my quantum leap.

No, my breakthrough came through the birth of my son Toby.

When my wife and I first found out that Toby was born with Down Syndrome, we felt overwhelmed just like anyone else would in hearing that news.

We had a lot of anxiety and fear of the unknown.

But all of those fears melted away very quickly because right from the beginning, Toby had an innate fearlessness and the ability to relate to us and others, without any other motive except his desire to connect.

Toby taught me the power of authenticity.

He taught me how to simply be yourself, no script, no agenda, how to let go of what you want and instead focus on being genuinely present with others.

When I practiced this with him, we flowed together and it worked.

It’s when I put pressure on him that things fell apart.

And I began to see the parallels of how this same dynamic was true of pretty much all human relationships, including sales. 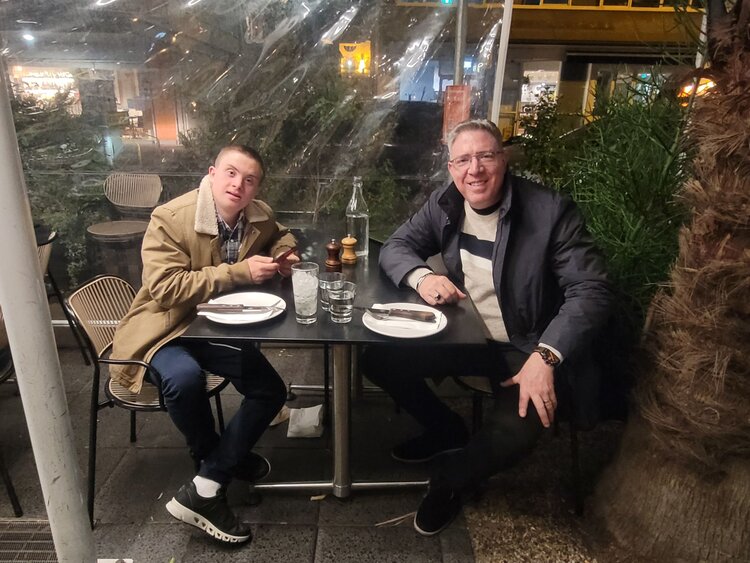 Did it ever occur to me to think about ways I could develop a relationship of trust in which we could explore what issues and problems my prospects were trying to solve?

Did I ever suggest that, without knowing more about my prospects’ issues and problems, I couldn’t know whether what I had to offer could help them?

Did it ever occur to me to ask them, “Where do you think we should go from here?”

I was on that call to make a sale and the implicit sales pressure I was exerting with every word I spoke, made them feel that it was okay to lead me on and even lie to me.

But by learning how to be Toby’s dad, I discovered that when you practice letting go of your agenda and focus on getting to the truth of their problem, you ironically make more sales.

I call it the One Call Sale.

No more pressure. No more chasing. No more games.

Learn The One Call Sale Today

Book Your Complimentary Consultation Here!
Play Video
Ari is the world’s #1 Authority on Trust-Based Selling and is the author of “Unlock The Sales Game” & “The One Call Sale”. He has also been featured in CEO Magazine, Forbes, CNN, SkyNews, Australian Financial ReviewAri is now the most sought-after trust-based selling authority for advisors, consultants, business owners and entrepreneurs — as well as major corporations such as Citibank, Telstra and General Electric.