Bait and Switch, Selling and Telling the Truth 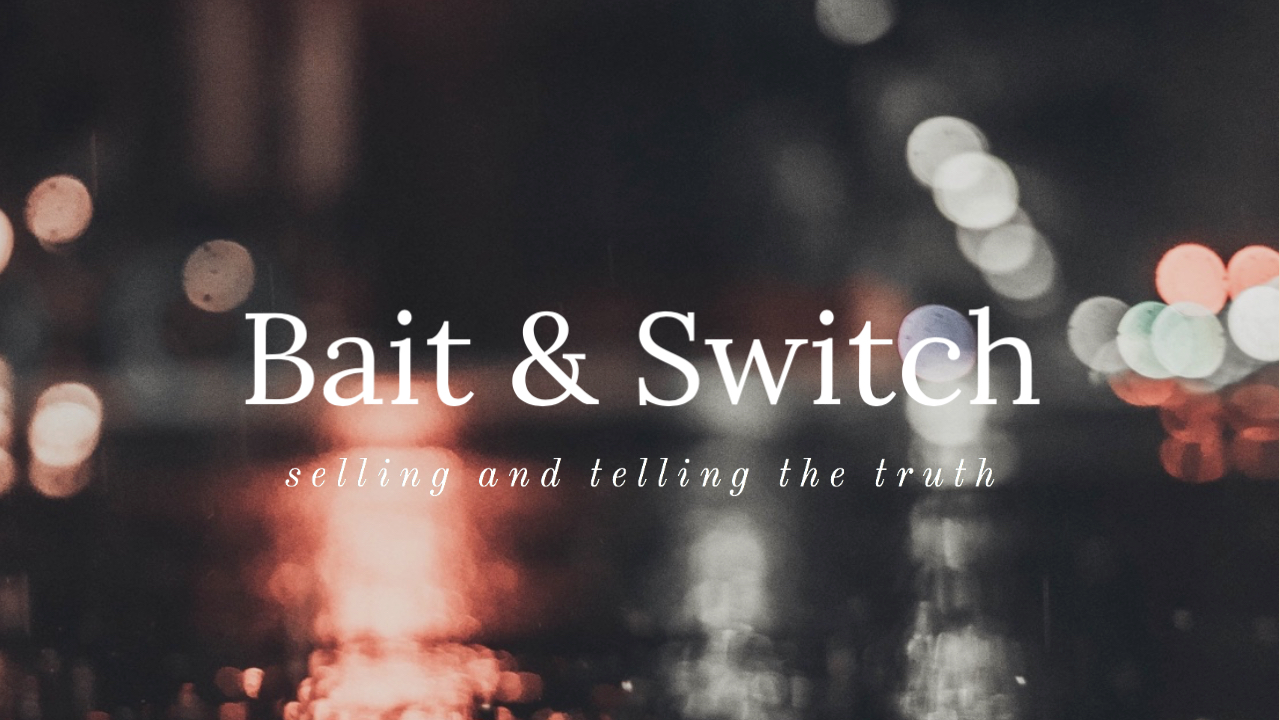 The other day, Sharon who is my long-time trusted “gatekeeper” covering our live chat box on our site, sent me this chat conversation she had:

Now normally, any leads that come from our chat box (which by the way, is a major profit channel for our business), are handled by one our staff members. And if the lead turns into a large opportunity requiring my input, then I’m made aware of it.

But this particular day when Sharon had this chat conversation, all of our team members were busy on the phones and I just happened to be available for a few minutes, so I decided to call this person back to see what they had in mind.

As always, as I picked up the phone to call him, I kept my mindset in check by not making any assumptions about where the call might go.

So I called and reached him on the phone and the first thing he says to me is, “Ari, I’ve been on your site for an hour now and have listened to your audio seminar and just love your philosophy of not pitching, being authentic and creating a conversation rather than trying to just ‘close’ someone.”

So I’m thinking to myself, “Well, here’s someone who really ‘gets it’ and will truly be a success story if he decides to come on board with our program.”

After a few minutes of talking about how much he resonates with the Unlock The Game Mindset, he starts pitching me his company’s online marketing services.

I was a bit startled by the “flipping” of the direction of the conversation, especially since he gave me the impression that the idea of “pitching” was exactly what he was trying to get away from.

He said “You really NEED to have a conversation with my manager because you don’t know what you’re missing in terms of how we can help you grow your online business. We have all the latest technology of how to bring you more visitors to your website that I’m sure you don’t have.”

He continued on without allowing me to say a word “…It will only be a 10 minute call with us, you really don’t know what you’re missing.”

As he was saying all of this, he was raising the volume of his voice and accelerating the momentum of his speech, putting immense pressure on me — making me feel like I was being “cornered” with no where to go.

After he paused for a moment, I gave him the benefit of the doubt and asked him to give me some examples of the online technologies that he says I was “missing”.

He started listing them one-by-one.

As it turns out, I’ve been using everything he said I was “missing” for the last few years in my business.

(I’ve been online for 7 years now, so I’m pretty up-to-date on the latest internet breakthroughs).

After I told him I’m already using everything he listed, instead of backing down, he started to get more aggressive trying to “overcome” the fact that we were obviously not a fit.

He started using aggressive sales tactics designed to make me feel like if I had any decency, I should close my business and start again: “Ari you have no idea what we can do for you…you just aren’t understanding what I’m saying…we have a “guru” on staff you need to talk to…we work with your competitors and you’d be making a BIG MISTAKE by not talking with us.”

He kept going and going and getting more aggressive with every word — creating a massive barrier between us and making me feel very agitated.

Finally I said to him “Look, you began this call with saying you hate people who try to pitch you and you want to learn to break away from being rejected on the phone. Yet, you continue to do EXACTLY what you are trying to get away from. You aren’t LISTENING to me. You’re talking yourself into trying to make me say ‘YES’.”

Hoping that would knock some sense into him, I waited to see if he’d back down so we can at least end our call in a pleasant manner.

Not a chance. He came at me even HARDER.

I was completely shocked by his inability to connect with me.

It was like he was a ROBOT given instructions to pursue his mission regardless of the casualties along the way.

Finally, I decided I had been as reasonable as I could and I said to him “You know what, I’m going to hang up the phone if we can’t end this in a pleasant manner.” Which is something I haven’t done for years.

After I said that, he tried to overcome that “objection” also.

I hung up the phone, feeling a pain in my stomach….that’s how much this call affected me.

Here was someone coming from the completely OPPOSITE mindset of what I teach in my program.

And someone who really needed to “detox” to come to his senses, so he could understand what he was doing to other people and how many sales he was losing because of it.

Here’s the world he lives in:

– And no qualms or ethical struggles with using a “bait and switch” tactic, giving me the initial impression that he was interested in making a change in his sales approach, then using that as a technique to get me to listen to his pitch.

In a day and age when what we need most is trust and connectedness between other human beings, here’s someone whose been trained to completely disregard that in pursuit of his own goal.

People like him (and there are thousands of others just like him) continue to buy the books and tapes of the old-school sales “gurus” who continue to teach that it’s perfectly acceptable to treat your prospects as puppets to control and take advantage of.

Funny thing is, we have hundreds of old-school trained sales people making the transformation into the Unlock The Game way of sales success all the time.

And they have two things in common:

2. And are willing to “let go” of their old notions of what they believe selling is

Those two, what I call “success ingredients”, are what it takes to experience tremendous sales success while at the same time creating genuine trust with others…and feeling a lot better about yourself.