Diffuse Objections by Listening To Your Prospect’s Concerns… 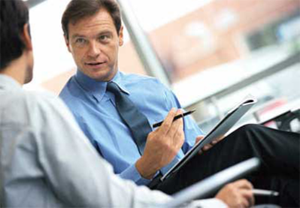 You’ve probably heard this over and over in your career: “If you hear an objection, immediately overcome it and move towards making the sale.”

That’s a very one-sided approach to a moment that could get really awkward quickly.

Objections are challenges raised by prospects. They put pressure on you, and they can bring your conversation to a halt, or help it grow.

Most approaches to selling insist that objections are challenges that can “lose” the sale if you don’t “handle” or “counter” them skillfully.

But if you’re coming from the Unlock The Game Mindset, an objection is simply a statement or a question that carries one of two messages:

But your goal is always to get to the truth of your prospect’s situation. The best way to do that is to train yourself to think of objections as ways you can learn more about that truth. That’s why I think it’s important to think of “objections” as legitimate “concerns.” It diffuses the rather confrontational aura around the term “objection.”

Many prospects carry a stereotyped “salesperson” image that comes into play whenever they’re approached by salespeople they’ve never had any dealings with but who come across as totally focused on “making the sale.”

If we keep in mind that people have had these experiences, we’ll find it easier to remain centered and calm. Then we can begin to reopen the conversation, which makes it easier for prospects to talk about their situation because they won’t feel pressured or threatened. They’ll trust that if they open up, you won’t take advantage of them by trying to “sell” your solution.

Trust is always fragile and easily damaged. When you hear objections that you sense aren’t true, they’re a signal that your prospect has started feeling mistrustful.

The Fight or Flight Reaction

People who sell typically handle objections in a defensive manner or in ways that try to convince prospects that their objection isn’t true.

But that’s actually an attack on the other person’s reality and puts them on the defensive. They start fearing that we’re going to try to “sell” them by persuading them, so they either challenge us more, or they try to get out of the situation.

They react with the classic “fight or flight” response. And so do we. Defensiveness, when we push back, is the “fight” response. Or we may choose the “flight” response. We may bow out and end the call or the meeting. If we’re in the traditional sales mindset, we may think that “fight” or “flight” are our only options when it comes to dealing with objections.

“That’s Not a Problem”

The Mindset gives you another option. You can respond to objections by diffusing pressure and reopening the conversation based on trust, so you and your prospect can determine together whether you’re a match.

When your prospect raises an objection, you can simply tell yourself, “Ah, here’s an ‘objection.’ I need to diffuse any tension, and to be sensitive to any defensiveness that they may be feeling so I can learn the truth.” So, whenever you hear an objection of any kind, in most cases you can begin by responding with these four words: “That’s not a problem.”

When you say this in a very calm, relaxed voice, you’re simply validating that whatever the other person saying has truth to it. You’re not denying what they’ve said, which might trigger fears that you have a hidden agenda. “That’s not a problem” diffuses tension and allows you to continue your conversation.

It may also be the last thing prospects expect you to say, based on their past experiences with traditional salespeople.

They may be surprised that you’ve validated what they’ve said as true, and that will increase your credibility and their sense of trust. And you’ll feel relieved because you haven’t had to “handle” or “confront” the objection. Confrontation often destroys trust and brings the relationship to an end.

By the way, some prospects may assume that “That’s not a problem” is just another script, canned phrase, or sales tactic aimed at moving them toward a “close.” In fact, traditional approaches often use a hurried, urgent, “No problem!” no matter what objections the prospect raises. But in the Mindset, this phrase is really a bridge that lets you continue the dialogue.

After you respond with “That’s not a problem” or another graceful, relaxed, low-key reply, your next step is to pause for a moment to let the other person take in what you’ve just said. They may be surprised because they didn’t expect that response. Let them have that time. Then, when it feels natural and comfortable, open up the conversation again with an appropriate phrase that goes behind or beyond the objection.

You can then ask a question that gives the other person the message, “I’m not going to try to persuade you otherwise, but I would like to know if you’re open to looking at this from a new perspective.” With this in mind, what you say next will really depend on the specific objection. You’ll notice that the suggested phrases “Would you be open to…” and “Would it make sense…” occur a lot in these examples. These wordings are important because you’re showing respect and simply asking prospects whether they’re open to considering something new, so it makes sense to continue your conversation.

The more you can shift from “Fight or Flight” mode to “re-engage” mode, the more you create trust and allow the conversation to re-open again without pressure.