Who’s the Guru With the Red Legs? 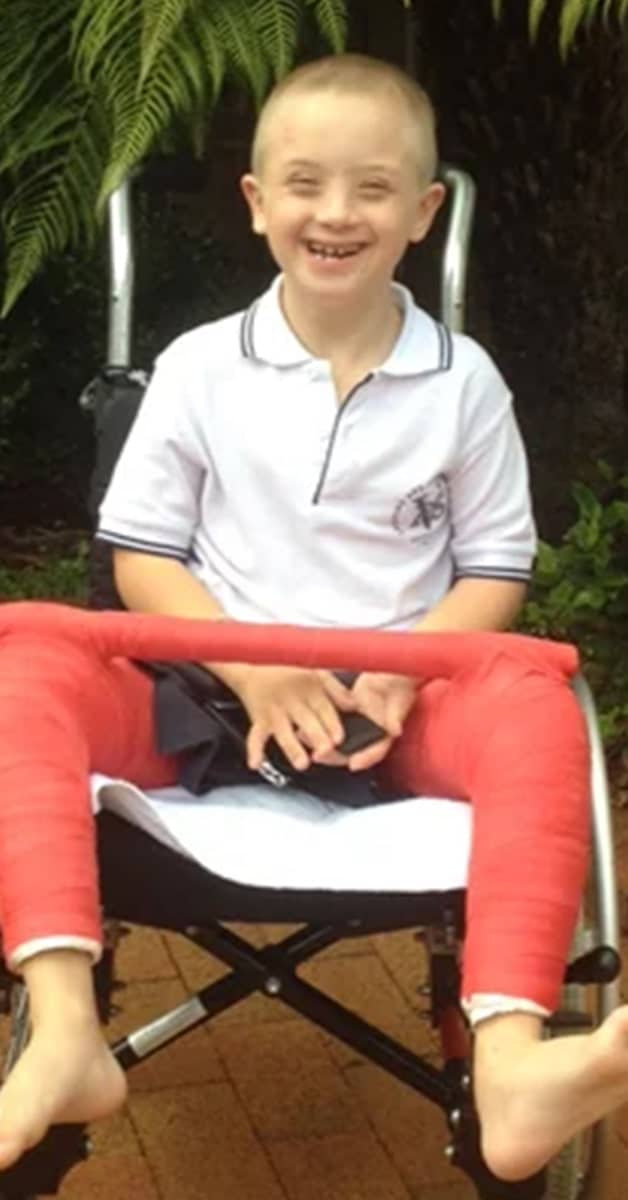 Toby, happy as can be with his “red legs”

Hope you’re having a good week.

I wanted to share something with you that I believe will help you have a great week, if you’re only having a good week so far.

Our son Toby, who has Down Syndrome, has been an inspiration to all of us.

I, my family and many of my clients are absolutely convinced Toby was put on this earth to teach all of us “adults” how we should live our lives with happiness and appreciation.

In fact, I wrote a book about his life philosophy called “Lessons From Toby: 52 Life Lessons About How To Stay Centered In Your Personal and Business Life”, you can learn more about the book here.

A few years ago Toby was experiencing discomfort, and then some pain in his left hip.

We took him to his doctor for an x-ray and we were told he had Perthes disease, a disorder of the hip joint.

In a nutshell, it means his hip bone has moved out of the socket that it normally sits in.

It is common though, for the hip to move back into place over time on it’s own, and that’s exactly what happened in his left hip.

Then about a year ago, Toby was experiencing the same pain in his right hip.

Back to the doctor we went, and turns out he had the same condition in his other hip.

This time though, the pain was more intense and the hip was not moving back into place.

There were only a couple of options we had to help him. One was a surgical procedure, but that was a high-risk option.

When we were told about the cast option, we were immediately taken back and almost depressed about how that would affect us and Toby.

We envisioned him stuck at home, unhappy and unable to really do anything. We had visions of extreme difficulty with even the simplest of daily activities, like going to the toilet while having his cast on.

We started thinking about how we were going to have to carry him to his room, get him into a car and so on.

For about a couple of weeks, prior to having the cast put on him, it consumed our every thought.

Turns out, we weren’t applying the attitude of happiness and appreciation that Toby had been teaching us his entire life.

The day he had the cast put on him, he didn’t go into a depression and wasn’t unhappy.

For him, it was “no big deal!”. In fact, not only was he as happy as could be, he couldn’t wait to show everyone his “red legs”.

He turned a situation that could have brought everyone down, into a situation that should be viewed differently…it’s not about what happens to you, it’s about how you decide to accept it and move on.

It also turns out, with the cast, he was still able to go to school. Toileting wasn’t an issue and we moved him downstairs to a room near us that solved the problem of having to carry him upstairs. And he fit into a wheelchair which allowed him to be mobile.

Fast forward to today….Toby’s cast is now off and he is in a walking brace (will need to be in that for about 12 months) to give his hip more time to move itself into place and Toby of course, is happy as can be. As you can see from the video clip on this page, he’s even running and kicking a ball!!

What can we all learn from Toby?

That in life, stuff will come our way that we aren’t going to like or want, but if we choose our attitude of how to deal with it, life will work itself out naturally and we can create a natural resilience that will take us through the challenges that come our way.

Would love to hear your feedback or comments below.